Tucked in the western foothills of the famous Blue Mountain Range, are the neighboring communities of Llandewey and Ramble, in St. Thomas, Jamaica. Llandewey was originally an area of large sugar plantations stretching across its borders. Chief of these was the plantation, owned by the Jamaican National Hero, George William Gordon, which stretched across the Yallahs River to the border of the community of Ramble.

Both sister neighborhoods possess similar terrains, being predominantly hilly with uneven topography. Major landslides in the Upper Yallahs River Watershed have resulted in the river carrying a greater silt load and it scours its banks far more quickly. The effects of severe environmental degradation is visible throughout the communities. The impact is mainly seen in the eroding banks of the Yallahs River that flows through community eating away the mountainside and taking land and homes in its path.

Farming historically was, and remains to date, the main occupation of the residents of Llandewey and Ramble. In Ramble, according to the Rural Agricultural Development Agency (RADA) of Jamaica, 92% of households are involved in farming, whilst, according to the Social Development Commission (SDC), 74% of households in Llandewey are engaged in farming.

Given the economic importance of agriculture to both communities, interruptions to farming from natural disasters are devastating to livelihoods and residents’ daily food subsistence. During these events, homes, farms and other structures are flooded and washed away, and water and debris travel downhill at rapid speed.

The residents of Llandewey and Ramble share a common history of being the first to respond to disasters in their respective communities. The Llandewey Community Development Committee in their ‘Llandewey/Ramble Environment and Disaster Mitigation Initiative’ submission to the Community Disaster Risk Reduction Fund (CDRRF) have cited interventions and proposed measures to reduce the impacts of hazards utilising disaster risk reduction and climate change adaptation solutions. 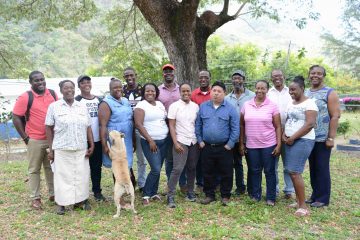 The project they designed will increase community Disaster Risk Reduction (DRR) and Climate Change (CC) awareness through a range of activities: public education and training; improvements in water resource management; rehabilitation of community centres in order to provide safe emergency shelters for residents; and the repair of the RADA Office, which serves as a meeting place for several community-based groups.

During the March 2017 visit to Jamaica, CDRRF Team provided the Executive Members of the LCDC with an update of the ongoing appraisal of their Project Application Document (PAD). Members were also informed of the additional requirements and preparations associated with the appraisal process.

This one-day meeting was dedicated to a participative community engagement exercise geared at generating a sense community attitude and information based on feedback from the Executive Committee. At the end of this exercise which was led by Richardo Aiken, CDRRF’s Community Development Specialist, the members agreed that when the community is engaged, projects are designed in alignment with the unique local culture, geography, social and economic factors. This helps to ensure not only successful project implementation but also, very importantly in the long run, project sustainability. 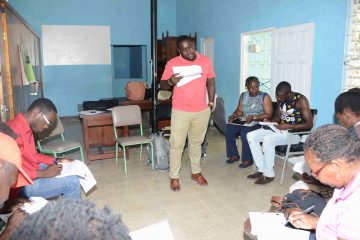 Mr. Aiken pointed out the factors that are important and integral in the implementation of successful community projects are:

According to Mr. Aiken “Information generated at the meeting captured the prevailing cultural, geographical, social determinants and political dynamics existing within the Llandewey/Ramble community, which will redound in a better and more hoslistic interpretation and such information will certainly led to a more successful and targeted execution of the project at hand.”

The participants in the meeting highlighted that the LCDC had over ten years of experience and involvement in various community activities, is accepted by the community, capable of leading its efforts, and willing to take the lead on community projects.

All members agreed that the LCDC needed to ensure the continued, active participation of the wider populace in all activities being developed and implemented by the community-based organisations represented on LCDC.

At the individual level, the executive members affirmed renewed commitment to participate in community development initiatives and acknowledged the importance of the role they could play in the continued development of Llandewey and Ramble.