Public Consultations on WTO Accession to Begin in March

BCCEC will engage the business community on WTO accession 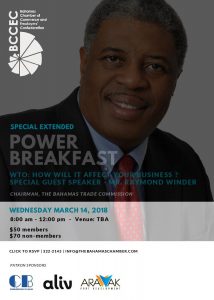 Mr. Raymond Winder, Chairman of the Bahamas Trade Commission, will be the special guest speaker at the BCCEC’s special Power Breakfast session.

The Government has set a deadline of December 2019 to join the World Trade Organization (WTO). In response to this pronouncement, the Bahamas Chamber of Commerce and Employers Confederation (BCCEC) has announced its commitment to engage its membership, the private sector business community, and the public in a series of WTO workshops and seminars in collaboration with the Bahamas Trade Commission and Ministry of Financial Services, Trade and Industry, and Immigration in order to facilitate an open and considered accession process.

The Bahamas first applied for full WTO membership in 2001 but has failed to complete its negotiations. In order to meet the self-imposed 2019 accession deadline, the nation will have to engage in very active and far-reaching public consultations to ensure that the views of all sectors of the economy are factored into this new round of negotiations.

The first consultation will be held March 14th

On Wednesday, March 14th, the first, in a series of WTO workshops and seminars, will be held from 8 am – 12 pm at the British Colonial Hilton Hotel. Mr. Raymond Winder, Chairman of the Bahamas Trade Commission, will be the special guest speaker at the BCCEC’s special Power Breakfast session under the theme, “WTO: How Will it Affect Your Business?” Registration begins at 7:30 am. The cost of attendance is $50 for members and $70 for non-members.

The half-day session will see participants from all industries and representatives from relevant government agencies. Insights on the WTO negotiating process will be shared, as well as a summary of what is going to be negotiated on behalf of the business community along with a look at the road to December 2019 and what will be required of the private sector.

The second round of consultations will take place April 25th

The second WTO related consultation session will be held at an all-day Trade Seminar and Expo scheduled for Wednesday, April 25th. The WTO will feature prominently on the agenda. There will also be presentations on trade relations with our major trading partners and discussions on accessing international markets and logistics and shipping, among others. The Expo will be open to all local businesses to showcase their products.

As a follow-up to both these events the BCCEC will then host consultations on a monthly basis, the first Wednesday of each month, beginning Wednesday, May 2nd from 6:30 pm to 9:30 pm; each one geared toward a different industry. The main takeaway from these sessions will be a Summary Report, which will be forwarded to the WTO negotiating team.

In addition to the public consultation, the BCCEC also intends to initiate independent research and analysis to look at the potential impact of WTO accession on various sectors of the economy.

The WTO helps producers conduct their business at a global level

The WTO, established in 1995, is headquartered in Geneva, Switzerland and as of 2016, had 164 countries making up its membership. It is the only global international organization dealing with the rules of trade between nations and is guided by agreements, negotiated and signed by the majority of the world’s trading nations and ratified in their parliaments.

The goal of the WTO is to help producers of goods and services, exporters, and importers to conduct their business at a global level. Two-thirds of its members are developing countries who play an important and active role in the organization as they seek to derive economic benefits from their participation.