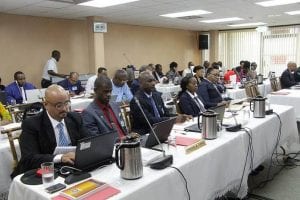 CSME was high on the agenda

Caribbean Community (CARICOM) trade officials on Wednesday began preparations for the 47th meeting of the Council for Trade and Economic Development (COTED), which will be held in Georgetown, Guyana, November 15-16. The two-day preparatory meeting is being held at the CARICOM Secretariat.

High on the agenda is the CARICOM Single Market and Economy (CSME) with emphasis being placed on the implementation plan for the CSME and challenges to that plan; making the CSME more effective and the definition of artisans and household domestics.

In remarks as the officials got down to business Wednesday, CARICOM Secretariat’s assistant secretary-general, trade and economic integration, Joseph Cox, pointed to the strides the Community was making in the CSME, especially in the area of free movement of people including professionals and service providers, even though hindrances remained.

The agenda of the preparatory meeting of COTED officials also includes the direction of CARICOM’s External Trade Policy as well as the Community’s trade relations with the United Kingdom post-Brexit. Cox said that the Community was nearing the conclusion of discussions with the United Kingdom on a new agreement that replicated the provisions of the CARIFORUM-European Union Economic Partnership Agreement post-Brexit.

Discussions on the trade in goods will centre on the expeditious review of the Common External Tariff (CET) and the Rules of Origin (ROO). The aim is a more efficient and transparent trading system that would help to unleash the productive energy and innovative potential of the region that would be more supportive of private sector initiative, Cox said.

He added that it was necessary also to deepen the existing relations with trading partners; forge agreements with selected neighbouring countries; and focus more on broadening the scope of those partnerships to include more focus on trade in services and the regulatory environment in which the trading is done.

Cox also referred to the threats to the rules-based trading system under the World Trade Organisation (WTO). He cautioned officials that there was need to position the Region to effectively participate in any discussion on the reform of the WTO to ensure that the Community’s interests were maintained through the preservation of longstanding principles such as special and differential treatment, recognition of the concept of small and vulnerable economies, and the development component.