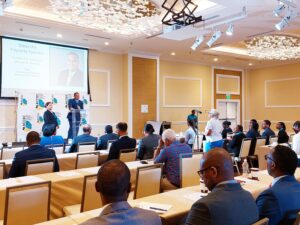 The highly anticipated networking series returned with a hybrid event held at the Margaritaville Resort on Wednesday August 10th. The Power Breakfast series which provides a platform to discuss issues critical to the wider business community had been on pause for two years due to the COVID-19 pandemic.

BCCEC Chairperson Khrystle Rutherford-Ferguson during her welcome remarks noted that despite the rebound of the country’s tourism sector, the economy is facing significant challenges, as rising global inflation remains a concern for businesses, consumers, and policy makers. She also noted that there are legacy issues which remain “pain points” for the private sector.

“Supply chain issues and the rising costs of goods and services make for a constant examination for our bottom line. There are still legacy issues affecting the private sector,” said Mrs. Rutherford-Ferguson. These she noted include access to financing, optimizing processes and business flows, increasing trade and high energy costs.

Economic and social recovery of The Bahamas

Senator Halkitis while outlining the Davis administration’s budget strategy noted that the 2022/2023 budget is dedicated to facilitating the economic and social recovery of The Bahamas. He further noted that given the current global economic conditions, it was critical that the budget address key issues impacting the country. Senator Halkitis noted that a healthy economy is needed to ensure a healthy business community and vice-versa.

“Given the times we are living in it was critical that we got this one right. Not only are we still emerging from most powerful natural disaster, but we are facing arguably the greatest health crisis the modern world has ever seen as well as the largest contraction of GDP in recent memory and now elevated levels of inflation,” Senator Halkitis said.

Senator Halkitis said that the government’s focus remains on fostering economic growth, improved revenue administration, cost containment and identifying new revenue sources, one of which is the carbon credits market. He noted that in the 2022/2023 budget the government introduced no new taxes, while providing tax reductions and incentives on food imports to help lower food prices, building materials to encourage construction activity and home ownership as well as tax incentives on electric vehicles. He also noted that the budget provides incentives for the agricultural and fisheries sectors. Senator Halkitis also addressed reforms to the country’s Real Property Tax legislation aimed at improving compliance as well as a reduction in the tax rate for commercial properties.

Senator Halkitis also noted that the government remains committed to the goal of providing $250 million to small business over five years, with $50 million being provided in the first budget cycle. The government has also established a $200m Family Island Development Trust Fund which will facilitate immediate and significant investment in infrastructure in the family islands.

Senator Halkitis said that while the budget takes some important steps in the right direction, the task now remains to execute the government’s various initiatives.