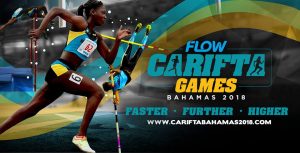 The Bahamas will host the CARIFTA Games for the eighth (8th) time on March 30th to April 2nd, 2018. The Games will bring together some 500 athletes and 150 team officials from 26 countries, all among the best track and field athletes in the Caribbean.

The CARIFTA Games is anticipated to be a stunning performance of athletics by young Caribbean athletes from all across the region. The event boasts of three days of the best junior competition ever experienced and promises to be the most exciting display of talent for 2018.

Come out to cheer on your favorite athletes and wave your flag in the crowd battles that promise to be as fierce as the battles on the track and field! This event will be the showdown of the year. You don’t want to miss it!