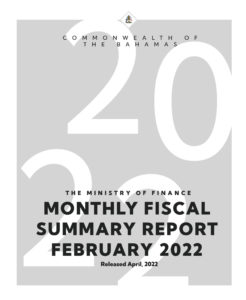 The Ministry of Finance is pleased to release its second monthly fiscal report on Government’s operations for the month of February 2022, as mandated by the Public Finance Management Act, 2021.

As a result of activities, a deficit of $33.1 million was realized for the month, approximately 52.0 percent ($35.8 million) lower than the same period of the year prior. For the eight months end- February 2022, the deficit is estimated at $326.5 million and 38.0 percent of budget, a 62.2 percent ($537.2 million) reduction in the $863.7 million deficit experienced during the prior year’s period. To support operations, Central Government’s net debt widened during the month by $181.3 million and $428.8 million for the eight months end-February 2022 as compared to a $1,291.3 million net debt increase during the same period of the prior fiscal year.

The Ministry invites and encourages the public to visit the national Budget Website (www.bahamasbudget.gov.bs) to view the various statistical reports available to the public or click here to download the reports.