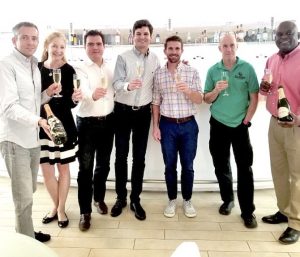 Bahamians can look forward to Sands Beer and its fellow beverages returning by “early summer”, the brand’s founder revealed yesterday, as he predicted a “massive” effort to rebuild market share.

Jimmy Sands, the Bahamian Brewery and Beverage Company’s founder, told Tribune Business it “has to basically start all over again” with its homegrown labels despite being able to draw on the inroads made with consumers pre-Dorian.

Revealing that the Freeport-based brewer is targeting a phased return to full production some nine months after the category five storm hit, Mr Sands said business will “not just fall into our laps” once Sands Beer and the other brands come back to bars and shelves.

The Bahamian Brewery and Beverage Company is set to resume “kegging” by the end of March 2020 as the first stage in resuming production, with drinkers who “favour bottles” likely to enjoy Sands’ return by “the end of May and early June”.

And Mr Sands said the company had gained “another feather in our cap” through the just-signed deal with Pernod Ricard to become the exclusive distribution agent and representative for its wines and spirits brands in this nation.

Describing the tie-up as “a vote of confidence” in the vertically-integrated brewer’s resilience and operating model, he added that it would provide a “valuable injection” of revenue to coincide perfectly with the company’s post-Dorian restoration efforts.

The Bahamian Brewery and Beverage Company founder said the addition of Pernod Ricard will “make it a much stronger and all-around company”, complementing other existing distribution deals with AB InBev (Budweiser) and Phillip Morris (tobacco company) to give it a full liquor product menu and range.

“Now we’ve just got to the brewery back up and running,” Mr Sands told Tribune Business. “It’s coming on well. As I speak there’s workers installing the new equipment, and we expect kegging to start at the end of March.

“It takes a little time to get everything back rolling again. Unfortunately you don’t turn the machine on and out it comes. That’s nine months. Nine months from a blow such as this is a long time in a business such as ours.”

Our local team – our staff – have worked very very hard

The company was forced to suspend production until new equipment could be installed and the water damage repaired, forcing it to rely heavily on its distribution and Jimmy’s Wines and Spirits retail business in the meantime until the brewing operation is restored to health.

Describing the damage as “substantial”, and in the millions of dollars, although he declined to give a figure, Mr Sands said he was “satisfied with the results of what transpired with the insurance company” in terms of settling the brewery’s Dorian claim.

Branding the outcome as “very fair”, he confirmed that the planned June resumption of full production was in line with the Bahamian Brewery and Beverage Company’s target timeline. Sands and its homegrown beers will then have to regain their popularity with consumers and re-establish the market share they enjoyed pre-Dorian.

“We’re going to have to start basically all over again,” Mr Sands affirmed. “Although we have a head start from past experience we will have to start again. I don’t think it will be as difficult as it was before, but it’s going to require a massive effort as the business is not just going to fall into our laps.

“We’re very excited to get this thing back up and running, and got for another run. We have a schedule and we’re still on target. The team out of Hamburg have been exceptional, and our local team – our staff – have worked very very hard. Everyone should be very proud of themselves. It was not one or two persons.

“My focus is to get the place back up and running, and all departments back up and running. When I walked into the place after the storm, after the shock and awe, I said: ‘There’s only one way to do this. Let’s get started’. With that attitude we got started and didn’t stop. Not only for my sake, but everyone else’s sake and the country’s sake. Everyone was affected.”

Mr Sands said the Bahamian Brewery and Beverage Company had retained its entire 130-strong workforce post-Dorian, and had only lost eight workers who left of their own accord.

“A tremendous effort went into it,” he added. “I’ve got to take my hat off to everybody. Everyone has worked feverishly to get this back into operation. Not just the brewery but the distribution, too. That was the first thing we had to get operational.

“We had the distribution put back together somewhat in Freeport two weeks after the storm, which was a miracle. It’s a brand new store here, better than it was before. We put that store together on East Bay Street in a difficult time. It’s a first-class store. And we’re completely reopened and refurbished in Abaco.”

The deal with Pernod Ricard is another feather in our cap

Confirming that “the timing couldn’t have been better when it came to the Pernod Ricard deal, Mr Sands told Tribune Business: “It’s another feather in our cap. To do such a thing after the storm came here required perseverance.

“It’s a big deal. It adds to the resources and also gives us an all-around strength with all these other brands. It makes the whole company a much stronger company, and is going to be a substantial, valuable injection. I don’t want to call any figures, but it will be a much-needed injection.

“These outside people, looking in to see what we can do, they can see we don’t fool around. It’s a tremendous vote of confidence in the company, and the people they have to work with,” he continued.

“It’s rounding-off the company as well – wines, spirits and beer. It gives diversification. If there is a problem in one area, another area can pick up the slack. If we had all the eggs in one basket we may not be here having this discussion now.”

The Bahamian Brewery and Beverage Company has carved out a strong niche in this nation’s liquor manufacturing, distribution and retail market since its founding in 2007.

It has been able to establish itself despite having to contend with the competitive challenge posed by BISX-listed Commonwealth Brewery, which is backed by 75 percent majority owner, Heineken, the global beverage giant.

The Bahamian Brewery and Beverage Company scored a major victory in 2015 when it won the Bahamian distribution contract for Budweiser and all brands produced by Anheuser-Busch from Commonwealth Brewery.