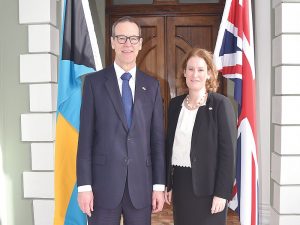 Brexit, the United Kingdom’s (UK) exit from the European Union, has moved the Commonwealth head to re-establish its high commission in The Bahamas, which will come with a focus on expanding co-operation in the private sector, but especially building on the two countries’ £200 million per year trade relationship, Sir Simon McDonald, the UK’s permanent undersecretary in the foreign office and head of the diplomatic service, told Guardian Business.

Speaking to this paper Tuesday, McDonald said the UK realized that closing its high commission in 2005 was a “mistake”, and he explained that the finalization of Brexit has obligated the country to reforge a diplomatic relationship with The Bahamas, and drive relationships along the lines of trade, business, and the environment.

“Now, in 2020, we’re out of the European Union, so we’re by ourselves and our own network is that much more important to us. The international agenda has changed in the last 15 years, and very much on our minds this year is climate change.

“Sarah Dickson (high commissioner to The Bahamas) is someone with private sector experience. This was a conscious part of our decision making. We have a good trading relationship with The Bahamas, it’s about £200 million per year, but clearly we could build on that and that is our express intent.”

He explained that while there is continuity with the European Partnership Agreement in terms of trade, UK Prime Minister Boris Johnson is also interested in establishing bilateral trade agreements with The Bahamas.

“We need our own agreement… the most comprehensive and freest trading agreements,” he said.

Sir Simon added that the UK will also deal closely with The Bahamas as it relates to climate change matters, and exploring how to further grow tourism from the region.

He said it can be expected that the new high commissioner will “feed commercial intelligence back to the UK” and organize trade missions between the two countries.