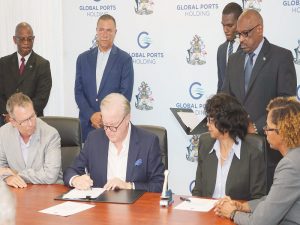 The government and Global Ports Holding finalized a $250 million agreement yesterday for the redevelopment of Nassau’s cruise port, six months after the company was announced as the winning bidder of the project.

During a ceremony at Festival Place, Prime Minister Dr. Hubert Minnis said the project will create about 500 construction jobs for Bahamians when work begins.

The port, which is set to be completed in 2022, will include a new terminal, a harbor village, a waterfront park, an amphitheater, a Junkanoo museum and new shops and restaurants. Additionally, the project will increase the number of berthing facilities for ships.

“After decades of discussion and debate, the transformation and revitalization of the historic City of Nassau and Downtown Nassau is about to take a dramatic leap,” Minnis said.

“Rather than Nassau going to sleep early every evening, Bahamians and visitors should enjoy a bustling and vibrant city, with exciting nightlife and entertainment, featuring Bahamian and international culture, music and food.

“Further, in keeping with world-class standards, we are also entering a new era in how Downtown Nassau is maintained and beautified, which may require new regulations and laws.”

Minnis said the company intends to make The Bahamas its headquarters for North, Central and South America.

“The new cruise port will feature an extraordinary variety of recreational, entertainment, shopping and food and beverage spaces for Bahamians, tourists and other visitors,” said Minnis.

“These small and medium-sized enterprises will be owned solely by Bahamians, who will be able to rent or lease spaces designed around various aspects of Bahamian culture.”

Kutman said that the company will provide educational and financial opportunities for retailers in hopes of ensuring that all products sold are produced in The Bahamas.

“We will not introduce any competitive retail,” he said.

“And I hope, I have to give this criticism, all the products are produced in The Bahamas as well, not shipped in from elsewhere.

“This is important, very important. So, we will, through an educational process that might take one to five years, make sure that the retailers, the mom and pop shops, are trained well enough to produce locally and sell internationally.”

He added, “All of the businesses operating in the port will be owned by Bahamians. It will be supported by us, financed by us if they need microloans.”

Minnis said the port project is representative of the anticipated transformation of Nassau.

“The transformation of the City of Nassau is at hand,” he said.

“A new Central Bank of The Bahamas will begin to rise from the site of the former Royal Victoria Hotel. A new U.S. Embassy will soon begin construction downtown.

“We are giving consideration to the old Central Bank Building potentially temporarily housing a historical and cultural institution, which may potentially attract scores of tourists, including cruise ship passengers.

“The iconic Government House and its grounds and gardens must be refurbished and redeveloped.

“Downtown Nassau, east of Rawson Square, must be renewed with a view to redevelop commercial and residential spaces.

“The government has already approved the partnership between the Antiquities, Monuments and Private Partnership Limited, a group of Bahamian businessmen, to refurbish and manage the historic forts and landmarks including the Water Tower.

“This is expected to enhance the tourist product. It will also enable Bahamians to enjoy a greater appreciation of our cultural sites.

“The government’s vision is transformation of the Nassau waterfront, inclusive of the new Nassau Cruise Port, into one of the most vibrant, dynamic, attractive and exciting waterfronts in the region.”

Bahamians are expected to be involved in the ownership of the port through a share offering. Bahamians will hold 51 percent of the shares. Two percent will belong to the YES Foundation and the other 49 percent will be available to Bahamians wanting to invest in the project.