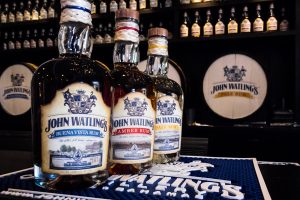 The assortment of rums is being distributed by Park Street Imports

John Watling’s Distillery has joined the export market, recently opening up its rum for sale to United States consumers.

In a press release announcing the move, the distillery said it began the export of its rums, with the signature name John Watling’s, to the U.S. on January 2 of this year.

The assortment of rums is available for purchase on the company’s website www.johnwatlings.com., and is being distributed by Park Street Imports, a technologically-driven provider of alcoholic beverage importing.

“John Watling’s rums are named after John Watling, the English buccaneer who, in the 1670s, landed on San Salvador, The Bahamas, and named it after himself,” the release states.

“In San Salvador, formerly known as Guanahani and later Watling Island, it is rumored that Watling’s treasure remains undisturbed at Fortune Hill.”

The company has received many awards and recommendations

The release explains that the rums are the only local spirits “listed as recommended by the Beverage Testing Institute in Chicago, Illinois.”

“They have been recognized and awarded by ‘The Fifty Best’ in New York City, New York; BarLife Magazine from the Czech Republic; Rum Bahamas in Nassau, The Bahamas; the Taste of the Caribbean competition in Miami, Florida; the Beverage Testing Institute in Chicago, Illinois; and the Concurso de Ron in Madrid, Spain,” according to the release.

John Watling’s Distillery employs more than 20 Bahamians, in lieu of using machines to fill, cork and hand label each bottle.

“It is our commitment to the environment to use the least amount of mechanization possible,” notes the company. “This is the reason why each bottle is hand-numbered and a sisal plait, hand woven by a female cooperative in Cat Island and South Andros, is carefully affixed to the neck of each bottle. At John Watling’s Distillery we manufacture our products the right way.”