Potter’s Cay vendors are looking forward to the development 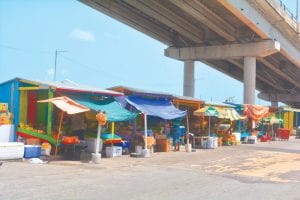 Government is working on the release of a request for proposals (RFP) for a public-private partnership (PPP) approach to managing and developing Potter’s Cay Dock, Minister of Agriculture and Marine Resources Michael Pintard told Guardian Business yesterday.

According to Pintard, government has been having discussions with people interested in partnering on the transformation of Potter’s Cay Dock, from which they will develop the RFP that will go out to the public to be bid on.

Potter’s Cay vendors, some of whom stake their very livelihoods on the area, have been waiting for years for successive governments to decide what they will do with the area, and how it will affect the stalls they have erected.

Government affirms that vendors and mailboat operators will not be disadvantaged

Pintard said the association of vendors will have an opportunity to present a plan outlining what they want to see happen with the spaces they occupy on the dock. He said as a group they can even issue their own proposal to vie for the PPP. However, whatever proposal is chosen, there will be a plan for those vendors and their businesses. He assured that written into any PPP policy will be the assurance that the primary stakeholders on Potter’s Cay Dock, whom he called the vendors and mailboat operators, will not be disadvantaged by the plan.

“The vendors will have an opportunity as a standalone group to respond to the RFP,” he said.

When the drafting of the RFP is done, it will be taken to Cabinet for approval. Pintard could not give a timeline on the issuance of the RFP.

Vendors have been concerned since the government began talking about renovating Potter’s Cay Dock that they would be left out of the conversation about their businesses and livelihoods. Pintard assured they would be intimately involved in the process.

Relevant government agencies will be represented at the new facilities

Another component of the PPP, according to Pintard, is to ensure that all of the relevant government agencies are represented at the dock in order to ensure taxation is not being evaded and that all rules are being closely followed.

The objective is to make the space more attractive and functional

Pintard added that discussions have occurred about bringing the proposed boardwalk that would run from the cruise port, all the way to Potter’s Cay Dock and transforming the waterfront, as well as the construction of a wharf.

“That can become a game-changer for Potters Cay Dock if we look at creating a pier,” he said.

“We have to rethink how we look at these spaces to make them more attractive and functional.”