Statement by the Hon. Brent Symonette on Accession of The Bahamas to the WTO3 Oct 2018

Third Meeting of the Working Party
on Accession of The Bahamas to the WTO
Geneva, 21 September, 2018 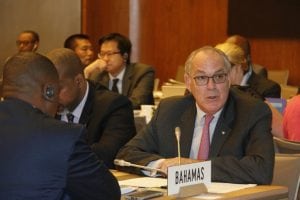 As minister responsible for international trade for The Bahamas, I am pleased to address this opening session of the Third Working Party Meeting on the Accession of The Bahamas to the World Trade Organization (WTO).

Last November, the Prime Minister of the Commonwealth of The Bahamas, The Hon. Dr. Hubert A. Minnis, formally wrote to the Director General and advised that the Government was committed to the accession process, and wished to accelerate it, with a tentative accession date of December 2019. This Third Working Party Meeting effectively re-launches the negotiations after a six-year hiatus.

The newly appointed Chief Negotiator, Mr. Zhivargo Laing, was the Minister of Economic Development with responsibility for international trade in 2001 when this process began. It has come full circle, as it now falls on him to lead the way in this process to a mutually beneficial conclusion.

Admittedly, our accession has taken longer than initially anticipated and there have been a number of reasons for this. One reason has been loss in momentum due to changes in political administrations over several election cycles since the start of this process. Another reason, and one that compounded the first, was the severe global economic downturn in 2007/2008, which pulled the Bahamian economy, as it did most economies, into a deep recession and required undivided focus in response to the resulting economic crisis.

As the economy emerged slowly out of that recession, the Government redoubled its focus on strengthening the country’s medium and long term economic growth and development prospects through a number of policy, legislative and institutional reforms. The reforms aimed broadly to improve the ease of doing business with a view to attracting new domestic and international investments, accelerating economic growth expanded trade and broadening economic opportunities and prosperity for the Bahamian people.

More specifically, success in this strategy would result in diversifying the economy, creating new business opportunities for Bahamian entrepreneurs, creating quality jobs and rising incomes, improving the Government’s fiscal position, enhancing the development of the nation’s infrastructure and improving the human resource capacity of its workforce.

These results and the core economic principles that facilitate them – fair and free trade, competition and intellectual property rights protection – are consistent with the aims of the WTO and the global trading system it promotes. Given their alignment with the national development interests of The Bahamas, restarting and committing to the conclusion of this accession process was deemed a strategic move for The Bahamas.

Since the last Meeting of the Working Party, the Government of The Bahamas has introduced a Value Added Tax (VAT), effectively reducing our reliance on customs duties as the principal source of government revenue. The Government has also launched a study to consider new tax reforms that will further reduce this reliance on trade distorting measures toward more progressive, and trade supporting ones. In addition to these strategic tax reforms, numerous legislative initiatives have been or are being undertaken to improve market access; protect intellectual property rights; promote competition; enhance consumer protection by the creation of a standards bureau and a modern Sanitary and Phytosanitary (SPS) regime; and improve transparency in the administration of the investment process. These and other reforms are components of our national development strategy. The Government considers WTO membership an integral part of that strategy.

Mr. Chairman, I must hasten to add, that while the Government of The Bahamas is fully committed to concluding its accession to the WTO, we are equally committed to ensuring that the terms of accession fully consider The Bahamas’ vulnerabilities, sensitivities and economic development needs. Ultimately, WTO accession must be, and must be seen to be, beneficial to The Bahamas’ short, medium and long term economic prospects.

While The Bahamas is recognised internationally as a relatively high per capita income country, the size of the economy, archipelagic nature of its seven hundred islands, its heavy reliance on a few key sectors of economic activity, its exposure annually to hurricanes, and its open economy make it particularly vulnerable to external shocks. The recent global economic crisis and a spate of hurricanes that hit the islands, demonstrated this vulnerability with great clarity. Indeed, the country continues now to emerge from the weight of the fiscal strain, high unemployment and general economic stress of those events. For both the short and medium terms, economic growth is forecasted to be moderate at best. Any hits to our economy, either by natural or human intervention, may set us back significantly. Therefore, the Government of The Bahamas seeks to ensure that the terms of this accession and the period allowed to make adjustments arising therefrom take into account these economic realities.

If we truly negotiate with sensitivity to each other’s interests, it will bode well for both The Bahamas and the WTO. Enhancing confidence in the WTO’s benefit to both the global trading system as a whole and to the development prospects of its members, especially those that are small and developing, can only encourage trust in the global governance system. The Bahamas wants to demonstrate to its private sector, with whom it is working closely, as well as its people, that the rules-based international trading system works to enhance its economic prospects, reduce vulnerability to external shocks, and create real and beneficial access to world markets for its goods and services as it does for the goods and services of others. This will spell success for this process and in the long term build confidence in the rules based global trading system. We believe that this is important and possible, and we invite you to work with us to make it so.

As members, we expect and will be fully engaged. We will be there in voice and vote. We will be active; we will be vigilant; and we will be partners.

The Government of The Bahamas looks forward to productive discussions with WTO Members today. Let me reiterate the commitment of the Government of The Bahamas to achieving membership on terms that safeguard our growth, promote the development of the Bahamian economy, allowing for growth and expansion into new industries, while providing enhanced trade opportunities for our trading partners.