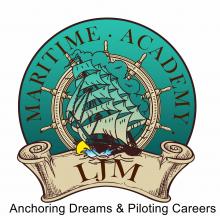 Royal Caribbean Cruises Ltd. Vice President Russell Benford had no idea what to expect when he crossed a narrow one-lane bridge at the end of Arawak Cay not far from the popular cruise port in Nassau, Bahamas, a remnant of a once-thriving Coral World with its underwater observatory.

An hour later, Benford said he was “blown away.” On the grounds where the marine park and beach resort flourished before being bashed by Hurricane Floyd and outdone by newer attractions including Atlantis in the late 1990s stood the dazzling $30 million LJM Maritime Academy. Its entrance, built to resemble the bow of a ship, hints at what’s inside – an array of simulators, including a 270-degree full ship maneuvering simulator, laboratories, sophisticated equipment, navigational materials, historically important ship papers, printed and digital charts, and rare documents.

“This must be one of the best-kept secrets in the world,” said Benford. “I am absolutely blown away.”

The classrooms, fittings, equipment and simulators suit every phase of maritime education imaginable — seamanship, engineering, navigation, operations, even a medical care station. A multi-story pseudo-ship with a full bridge allowing captain-to-engineer communication is so realistic that Benford, who is accustomed to the real thing, said he was “wowed” by the quality and authenticity of the representation.

“Twenty-five of our award-winning ships are registered in The Bahamas,” said Benford, who handles government relations for the Americas for the cruise company headquartered in Miami. “To know that a facility like this is here is just incredible. I can see so many opportunities.”

Careers in the maritime industry offer many opportunities

For Dr. Brendamae Cleare, a veteran mathematics educator and now president of LJM Maritime Academy, it is all about opportunity. Students spend three years with the academy, including one at sea. The first full graduating class will pass out in October.

She was surprised to learn that Michael Bayley, Royal Caribbean International President and CEO, started out working on a ship when he began his career with the world’s largest global cruise line in 1981.

When the academy that grew out of a $30 million grant by Campbell Shipping headquartered in Nassau opened, they were hoping to keep tuition for cadet officer training to $5,000 a year, but operational costs forced them to raise that fee to $14,000 a year for two of the three-year programs. One year is spent at sea. A four-month program is also available for ratings candidates at a much lower cost.

RCL intends to explore ways to partner with the academy

Nearly 180 students have entered the programs which are audited regularly. They graduate with diplomas in hand, many with careers lined up on bulk handlers, cargo container ships and cruise ships. For cadet officers, starting salaries will more than compensate for their education. Nearly 40 students will graduate this year, 12 with fully-accredited credentials preparing them for high-paying jobs, 15 completing their pre-sea training, and another 11 completing the ratings course. About a third of all enrollees are female.

Lecturers come from as far away as Poland, Lithuania, Bangladesh, India and some, like Tyrone Brown, who wears several hats including as a firefighting instructor, from Nassau. Firefighting drills are staged on a large ship-like structure made from 18 containers welded together. Drills are tough, the fire is real and the need to extinguish it is urgent.

Benford said RCL, which currently delivers 1.2 million guests a year to The Bahamas and plans to increase that number to 1.75 million in the next two years, would explore ways to collaborate with LJM Maritime Academy. Its first partnership is likely to come when the academy hosts its second annual maritime conference in October.