BAHAMAS DELEGATION TO THE 3RD MEETING OF THE WORKING PARTY ON THE ACCESSION OF THE BAHAMAS TO THE WORLD TRADE ORGANIZATION (WTO),
21ST SEPTEMBER, 2018, GENEVA, SWITZERLAND

AND
APPOINTMENT OF MR. ZHIVARGO LAING AS CHIEF NEGOTIATOR OF THE BAHAMAS’ ACCESSION TO THE WORLD TRADE ORGANIZATION (WTO) 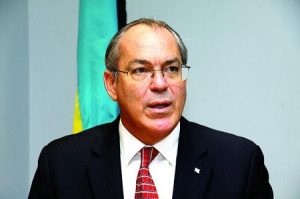 The Government of The Bahamas is pleased to announce the appointment of Mr. Zhivargo Laing, the Executive Director of the Government and Public Policy Institute at the University of The Bahamas and former Cabinet Minister, Member of Parliament and Senator, as Chief Negotiator of The Bahamas Accession to the World Trade Organization (WTO). The Government is confident that Mr. Laing is well suited to lead accession negotiations and ensure that the terms of our WTO membership will be mutually beneficial to The Bahamas and WTO members. Indeed Mr. Laing, who is trained in economics and finance, once had responsibility for international trade policy and during his tenure as Minister of State for Finance led The Bahamas’ application to accede to the WTO in 2001.

Mr. Laing succeeds Mr. Ray Winder, who served as Chief Negotiator at the inception of The Bahamas’ bid to join the WTO and then again in 2017. Mr. Winder resigned this position on 3rd July 2018 to serve in a private sector post. He has given selflessly to the country in his role as Chief Negotiator and is owed a great debt of gratitude for his longstanding service. That gratitude is expressed once again on this occasion.

Desirous of putting the Bahamian economy in the best position to realize its growth and development potential, the Government of The Bahamas recommitted itself to the WTO Accession process. It is envisioned that accession will benefit The Bahamas through new export opportunities, lower the cost of doing business, lower the cost of consumer goods, streamline business processes and bring greater certainty to international trade arrangements. These, and other benefits, could lead to faster economic growth, higher employment, expanded Bahamian ownership in the local and global economy and increased shared prosperity.

In November 2017, the Government of The Bahamas committed to accelerating efforts to finalize The Bahamas’ accession to the WTO by December 2019. In this regard, the Ministry of Financial Services, Trade & Industry and Immigration carried out extensive consultations with stakeholders across various economic sectors to obtain private sector input. The consultations were industry-specific and assisted in formulating the Government’s negotiating position in respect to each of the country’s economic sectors. Consultations were held from April to May 2018 in Nassau, in mid-May 2018 in Grand Bahama and in June 2018 in several Family Islands. The Government also conducted two comprehensive vulnerability and revenue studies, the findings of which included an extensive profiling of the Bahamian economy and the creation of an economic model with a baseline that potentially enables first class modelling of outcomes from any positions adopted in the country’s economic and trade policy sectors.

The Ministry of Financial Services, Trade & Industry and Immigration has now submitted all necessary negotiating inputs required by the WTO Secretariat to formally recommence the WTO accession negotiations, including an updated Factual Summary of Points Raised, a Revised Goods Offer and a Revised Services Offer, the latter of which reflects input from the consultations that have taken place to date.

After a six-year hiatus, on 21st September, 2018, the 3rd Meeting of the Working Party on the accession of The Bahamas to the WTO will be convened in Geneva, Switzerland. This third iteration of the Working Party Meeting will formally re-launch negotiations regarding accession to the WTO. The Working Party Meeting will be preceded by a number of bilateral meetings with Third States interested in the trading regime in The Bahamas, including the United States of America. The Delegation is also expected to hold Meetings with the International Trade Centre (ITC), the World Intellectual Property Organisation (WIPO) and the Advisory Centre of WTO Law (ACWL) to discuss technical assistance for The Bahamas.

If accession negotiations and terms of WTO membership prove to be mutually beneficial, The Bahamas intends to join the WTO by late 2019 or mid-2020.

A debriefing session will be convened once the delegation returns to advise on the outcomes and pertinent issues which arose during the Third Working Party Meeting and bilateral meetings with Third States, and to discuss the way forward shortly after we return.