“A new day is on the horizon for Grand Bahama,” says Prime Minister of The Bahamas, Dr. the Hon. Hubert A. Minnis.  “This island has endured many struggles, but today there is the promise of a new and exciting future for Grand Bahama.” 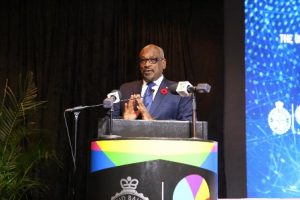 Prime Minister, Dr. the Hon. Hubert Minnis was the keynote speaker at the official opening of the Grand Bahama Tech Summit on Thursday, November 9, 2017 at Grand Lucayan resort. In his remarks Prime Minister Minnis told delegates that Grand Bahama was ideally suited to become the Tech Hub of The Bahamas. (BIS Photo/Lisa Davis)

The Prime Minister’s remarks came during the official opening of the Grand Bahama Tech Summit at Grand Lucayan resort on Thursday, November 9, 2017. The first Tech Summit will lay the foundation for establishing Grand Bahama as a Tech Hub for The Bahamas.

The summit boasts an impressive list of speakers, including tech innovators and IT developers from Google, Microsoft, Hewlett Packard and others; the conclave runs November 9-10.

As the keynote speaker for the summit, Prime Minister Minnis took time to sell The Bahamas, particularly Grand Bahama, to tech companies present as a favorable place in which to set up business. He noted that the Government of The Bahamas has embarked on a mission to establish Grand Bahama as a world-renowned technology hub.  “Today, through this first ever Grand Bahama Technology Summit, we are starting on the path to realize this goal,” said Prime Minister Minnis.

“We are pleased to play host to this distinguished gathering of some of the finest minds in technology. Indeed your meetings over the next two days will be instrumental in the strategic planning process of promoting the information, communication and technology industry.”

To further prove his point, the Prime Minister highlighted the island’s modern and superior infrastructure, as well as a reliable electricity supply and high-speed Internet.

“The Freeport Container Port boasts the deepest container terminal in the region,” the Prime Minister noted. “Our 24-hour-a-day facility serves as a major transshipment hub between the U.S., Latin America and Europe.

“The Bahamas is a stable democracy, committed to the rule of law, with one of the best banking systems in the region.”

The development of human capacity is crucial to goal

An important part of establishing Grand Bahama as a Technology Hub will be the development of human capacity through education and training.  As a result, Prime Minister Minnis said he was pleased to note that the Grand Bahama campus of the University of The Bahamas is playing an active role in this first ever Tech Summit.

The Prime Minister encouraged the many students who attended the opening of the Tech Summit to explore careers in the fields of science, technology, engineering, mathematics and information technology.  “Grand Bahama should be a place where Bahamians can confidently pursue careers in these fields and know that there will be an avenue for their skills to be utilized,” said Prime Minister Minnis.

“Grand Bahama is already becoming a manufacturing center for cutting-edge technology, as exemplified in the recent soft opening of Carnival Corporation’s Ocean Medallion Project.  Grand Bahama will now be the place where industry meets technology. In many ways, it is a new beginning.

“Grand Bahama is certainly open for business and welcomes international business representatives, particularly those from Google, Microsoft and HP to discover what this island has to offer. I also want to encourage Bahamian professionals and aspiring entrepreneurs, at home and abroad, to establish your businesses here at home.”

In closing the Prime Minister extended a special invitation to all international tech companies represented at the Tech Summit to consider The Bahamas in general, and Grand Bahama in particular, for their ICT conventions, annual meetings and corporate retreats.