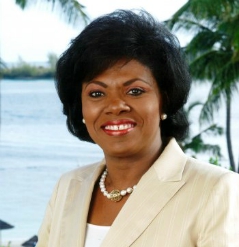 Lynden Pindling International Airport’s (LPIA) operator yesterday said the development of a 100-120 room hotel could be  opened to all-comers via a Request for Proposal (RFP), after the initial developers elected not to “pursue” the project.

Vernice Walkine, Nassau Airport Development Company’s (NAD) president and chief executive, told the Rotary Club of Nassau Sunrise that construction of a small hotel at LPIA was one of several projects being explored.

“We haven’t concluded a deal on that yet,” she said. “It looks like we will be issuing an RFP on that. When I joined the company in 2010 there was already a developer who had been given a lease.

“For all kinds of reasons the deal has just been protracted. We have had so many expressions of interest from others, and we had put them on hold because we had this developer under lease. That lease and all of its terms have expired now, so we are going to issue an RFP to allow as many interested parties as possible to put a proposal to us.”

Ms Walkine said the LPIA airport hotel would be between 100-120 rooms, and targeted at a mid-market price point. “Not a day goes by that we don’t get asked by passengers why we don’t have a hotel,” she added, “because flights get delayed, flights get cancelled and people have to be bussed to resorts.

“It’s not intended to be a resort, but it will be really be for the benefit of domestic and international travellers who need to spend one night. We have had the research done and we see that it could be very viable.”

Tribune Business exclusively revealed plans for an airport hotel back in October 2011. The original developers were said to be the owners of the Atlantic Resort & Spa in Fort Lauderdale, and were looking to construct the hotel on a three-acre site immediately to the south of Windsor Field Road, right between the two entrance and exit roundabouts for LPIA.

The project was anticipated to create between 100-150 full-time jobs, and the developers were aiming to construct a facility of ‘four-star’ standard, rather than the typical ‘two-star’ airport hotel, targeting the private aviation market and foreign directors of Bahamas-based companies who fly into LPIA for Board and other meetings.