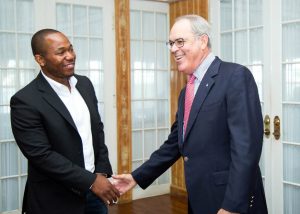 Hogan Bassey took the long road to social entrepreneurship – he was a victim long before he created a business with a cause. Now the entrepreneur whose product with a purpose, a long-lasting insect repellent called Akiva, aims to take the sting out of mosquito season and help The Bahamas avert another epidemic of mosquito-borne diseases.

This week Bassey was in The Bahamas to tell his story of what inspired him to form a company called LivFul with an ambitious mission to save 200,000 lives a year worldwide.

“Every year one million people die from mosquito-borne diseases and hundreds of millions more suffer from dengue, West Nile, malaria, chikungunya, zika,” said Bassey. “We want to make a difference.”

It was Bassey’s back story that opened eyes and won hearts as he made the rounds, talking on radio, appearing on TV, speaking to Rotarians, meeting with doctors, pharmacists and health officials.

Born in America to Nigerian parents, Bassey returned with them to their native land as a very young child.

“In Nigeria, mosquitoes are a way of life. They are everywhere,” he said. By the time he was 10, he had been stricken by malaria at least four times. Bedridden and deathly ill for two to three weeks at a time with long, slow recovery periods before he could regain his strength or return to school, he describes the violent and debilitating symptoms in such detail it is as if he is re-living the pain.

By the fourth round of malaria, Bassey had had enough and vowed to do something about it.

“In my 10-year-old head I said I won’t get sick if the mosquitoes don’t bite me so I just need to find something to stop them. It was such a brilliant idea I couldn’t believe no one had thought of it before,” thought young Bassey, oblivious in Nigeria to the existence of repellents.

He became obsessed with finding a solution.

His first somewhat successful formula was a long way from perfect but it planted a seed that kept cropping up in his thoughts though it would not be ready to harvest for another 20 years.

Seven years, dozens of iterations, endless testing, legal legwork and applications for various approvals later, Bassey’s exhaustively tested, high performing mosquito repellent, Akiva, hit the market this summer. It launched first in The Bahamas where it is being distributed by Lightbourn Trading Co. and should be on shelves throughout the islands in coming days.

The Bahamas, he said, was selected as the test market because it so closely parallels the U.S. in threat, mosquito-related disease incidence and per capita income. Akiva is slated to be launched in Brazil next and in the U.S. by end of year. It has passed all Food and Drug Administration tests and is awaiting final paperwork.

Bassey is no longer working the bite fight alone. He has partners and investors, including a major pharmaceutical company that was attracted to both the mission of saving lives and the efficacy of the product itself. One of the company’s co-founders, Tycho Speaker, created the technology. The University of Georgia did all the formulation testing during the development process and the first significant study when the product was ready for testing.

Akiva’s properties and performance, says Bassey, speak for themselves. More than 90% of the repellent’s components are nature-based, including IR3535 derived from Beta Alanine, an amino acid found in many edible supplements. Discovered to have repellent properties over 30 years ago, IR3535, though safe, was less effective than some other repellent agents until Akiva combined it with a plant-based timed-release technology derived from algae and mushrooms.

Test results have been even greater than the company had hoped for. Arm-in-cage tests with 40 participants showed Akiva’s effectiveness lasted up to 16 hours keeping 200 female, buzzing biting mosquitoes at bay. 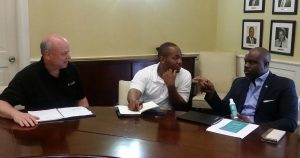 “It may last longer than 16 hours, but according to the arm-in-cage testing protocol, 16 hours is the limit we are allowed to keep people in that position and awake,” said Bassey. Akiva feels light, is gently scented and can be used along with sunscreen and is safe for young children, the company says.

“The summer is coming, school is out, children will spend more time outdoors. That also means the rainy season so construction workers and others working outdoors will need to protect themselves,” said Bassey. “The Bahamas has suffered through all the epidemics, dengue, chikungunya, zika, though fortunately has largely been spared malaria. There are those who believe the last creature alive will be the mosquito. Despite its small size, the devastation it can wreak is huge and we want to bring more awareness to the fact that mosquitoes are not just annoying when you are trying to enjoy the outdoors, they are life-threatening and everyone needs to protect themselves.”

Bassey and partners also want the public to understand the concept of social entrepreneurship.

“The general perception is that there is a chasm between doing social good and creating business success,” said Bassey. “If you look at the companies that are highly successful, it was because they provided a solution and they did it with clarity. What science shows is that people gravitate toward clarity.” He cites Ford Motor Co., Microsoft and Google as examples of companies that became leaders in their spaces because they were driven by a single well-defined mission and accomplished it without muddying the waters.

“The advantages of a social mission is that the creators of that mission are passionate about it and they ignite a passion in their customers,” Bassey told the Rotary Club of East Nassau. Now married and with the birth of his first dream, a mosquito repellent that is already being highly touted, Bassey is looking at the next challenge, repelling against bacteria-borne diseases. He is, he says, just pursuing the mission of LivFul, aiming to save 200,000 lives a year.