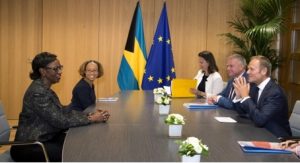 During her exchange with the EU Council’s President, a number of issues of importance to both The Bahamas and the European Union were raised including that of BREXIT, changes in the global political arena and the impact of climate change. Ambassador Jackson signaled that the increase in intensity and frequency of hurricanes have left a devastating impact on The Bahamas evidenced by Hurricanes Joaquin and Matthew.  The Ambassador expressed concern at emerging threats to The Bahamas’ financial services sector and that of the wider Caribbean with current issues such as correspondent banking and the use of per capita income as a determinant of economic viability which has resulted in graduation and its inherent inability to access concessional loans.  Within the wider context of the future relations of the EU and the countries of Africa, the Caribbean and the Pacific (ACP), the Ambassador underscored the importance of maintaining a unified approach for the tri-continental region, with a legally-binding agreement of mutual benefit.

President Tusk was pleased to note that The Bahamas was one of those countries which has maintained friendly relations with the EU and added that he looked forward to greater engagement with CARIFORUM members countries, particularly at the Summit of EU and Latin America and Caribbean Heads in El Salvador in October of this year. Ambassador Jackson expressed The Bahamas’ appreciation for the EU’s continued development assistance through the European Development Fund (EDF), citing EU funded projects as the recently launched Trade Information Portal and ongoing effort to strengthen Economic Partnership Agreement Implementation.

As Ambassador to the European Union, Ambassador Jackson will also be responsible for matters pertaining to the ACP.  A courtesy call was also made on ACP Secretary General, H. E. Dr. Patrick I. Gomes who congratulated the Ambassador on this formal recognition of her appointment as Ambassador to the EU, noting The Bahamas’ commitment to the work of the ACP throughout the years.  He cited the upcoming Meeting of ACP Ministers responsible for Fisheries and Marine Resources to be hosted in Nassau from 18-21 September, 2017 as a demonstration of The Bahamas’ solidarity with the ACP.  Ambassador Jackson hosted a small reception at Au Vieux Saint Martin, a restaurant owned by The Bahamas Honorary Consul in Brussels, Albert Jean Niels.

Ambassador Jackson, who serves concurrently as The Bahamas’ Ambassador to Belgium and Switzerland, was accompanied by Ms. Alarice Grant, Second Secretary.