The Government of the Commonwealth of The Bahamas hosted the United Nations Small Island Developing States (SIDS) Symposium on 21 – 23 February, 2017 at the Melia Nassau Beach Hotel. 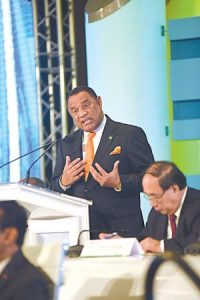 The discussions reflected on how SIDS can integrate the 2030 Sustainable Development Agenda and the SIDS Accelerated Modalities of Action (SAMOA) Pathway in national planning, policies, strategies and public institutions.

The symposium concluded with an informal communiqué being issued, which was prepared under the leadership of the Ministry of Foreign Affairs in consultation with participants. The communiqué identified critical action points emanating from the discussions.

The Prime Minister, the Rt. Hon. Perry G. Christie, opened the Symposium and stressed the importance of good governance to the achievement of the sustainable development goals.