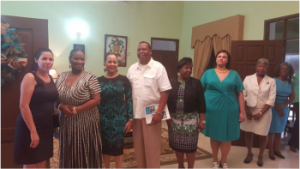 Her Excellency, Alma Adams, Ambassador of The Bahamas to Cuba received our nation’s First Lady Mrs. Bernadette Christie, who led a delegation to Cuba as patron of these celebrations. Mrs. Christie was accompanied by H. E. Mr. Picewell Forbes, Member of Parliament and High Commissioner of The Bahamas to CARICOM Member States, Mr. Leon Bethel, Senior Assistant Commissioner and Superintendent Dennis Sturrup of the Royal Bahamas Police Force (RBPF) and officers of the RBPF Pop Band. On hand also to participate in these festivities were Mr. Edison Sumner and members of the Bahamas Chamber of Commerce, as well as a number of Bahamian Medical doctors who recently graduated from The School of Medicine of Cuba, located in the Provinces of Artemisa, Santiago de Cuba and Camaguey.

The Reenactment of the Flag Raising Ceremony was a spectacular and momentous occasion for The Bahamas, painted against the backdrop of the prestigious 5th Avenue, better known as President’s Way, which is also the centre thoroughfare of pomp and circumstance for all things government and diplomatic.

It was here that a brand new Bahamian flag was commissioned and presented to Corporals Treco Johnson and Vernon Thompson of the RBPF by Mrs. Christie, and hoisted proudly to the melodious sounds of “One God, One People, One Bahamas” by the Pop Band, and in the presence of Cuban Government Officials including H. E. Mrs. Ismara Vargas Walter, Ambassador of Cuba to The Bahamas, members of the Diplomatic Corps, other Bahamians, family members and friends of The Bahamas.

In true Bahamian style, this event was immediately preceded by a glorious and invigorating Service of Thanksgiving held at the Historic Episcopal Cathedral of the Most Holy Trinity in Vedado. The service was presided over by the Rev’d. Jose Angel Gutierrez, Dean of The Cathedral, and featured the presentation of colours by the RBPF. Remarks were offered by Mrs. Christie, Ambassador Adams and H.E. Forbes, and a musical rendition by Mr. John R. Darville, former Youth Ambassador to CARICOM.

“It was a remarkable moment” Ambassador Adams noted, “today a new and exciting era has been embarked upon and as a people we are well poised to engage in the further strengthening of ties between The Bahamas and the Republic of Cuba.”

The festivities culminated with an evening of grandeur, as over 200 guests were in attendance at the Official Residence of The Bahamas, located in Siboney, Playa, namely, the Minister of Justice of Cuba, Maria Esther Reus Gonzalez who led a contingent of high-ranking Cuban officials present at the event. The RBPF Pop Band erupted with rich Bahamian music and everyone danced all night long, concluding with the electric slide and The Bahamas’ National anthem.

The lush décor, presented in the national colours of The Bahamas provided an appropriate ambiance for the celebrations; the menu which included rich Bahamian dishes and a special cake cutting, set the agenda for the evening’s celebrations. Mrs. Christie was on hand to present awards of appreciation to all employees of the Embassy, including special recognition awards for the staff members who would have served from the inception of the Embassy.

The Embassy of The Bahamas in Cuba maintains a very important role in the diplomatic community, providing access to more than one hundred Missions of other countries and some thirty (30) international organizations present in Cuba. Ambassador Adams is the first woman Ambassador to the Republic of Cuba and succeeded Their Excellencies Dr. Davidson Hepburn, Sir. Arthur Foulkes, Mr. Carlton Wright and Mr. Vernon Burrows.