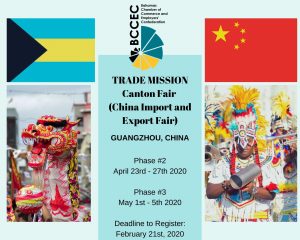 The China Import and Export Fair, also known as Canton Fair, was established in 1957. Co-hosted by the Ministry of Commerce of PRC and the People’s Government of Guangdong Province and organized by China Foreign Trade Centre, it is held every spring and autumn in Guangzhou, China.

The Canton Fair (China Import and Export Fair) is the largest trade fair with the largest scale, the most complete exhibit variety, the broadest distribution of overseas buyers and the greatest business turnover. More than 25,000 exhibitors, about 200,000 buyers will attend.

Click here to be part of the Bahamas Chamber of Commerce and Employers Confederation delegation.